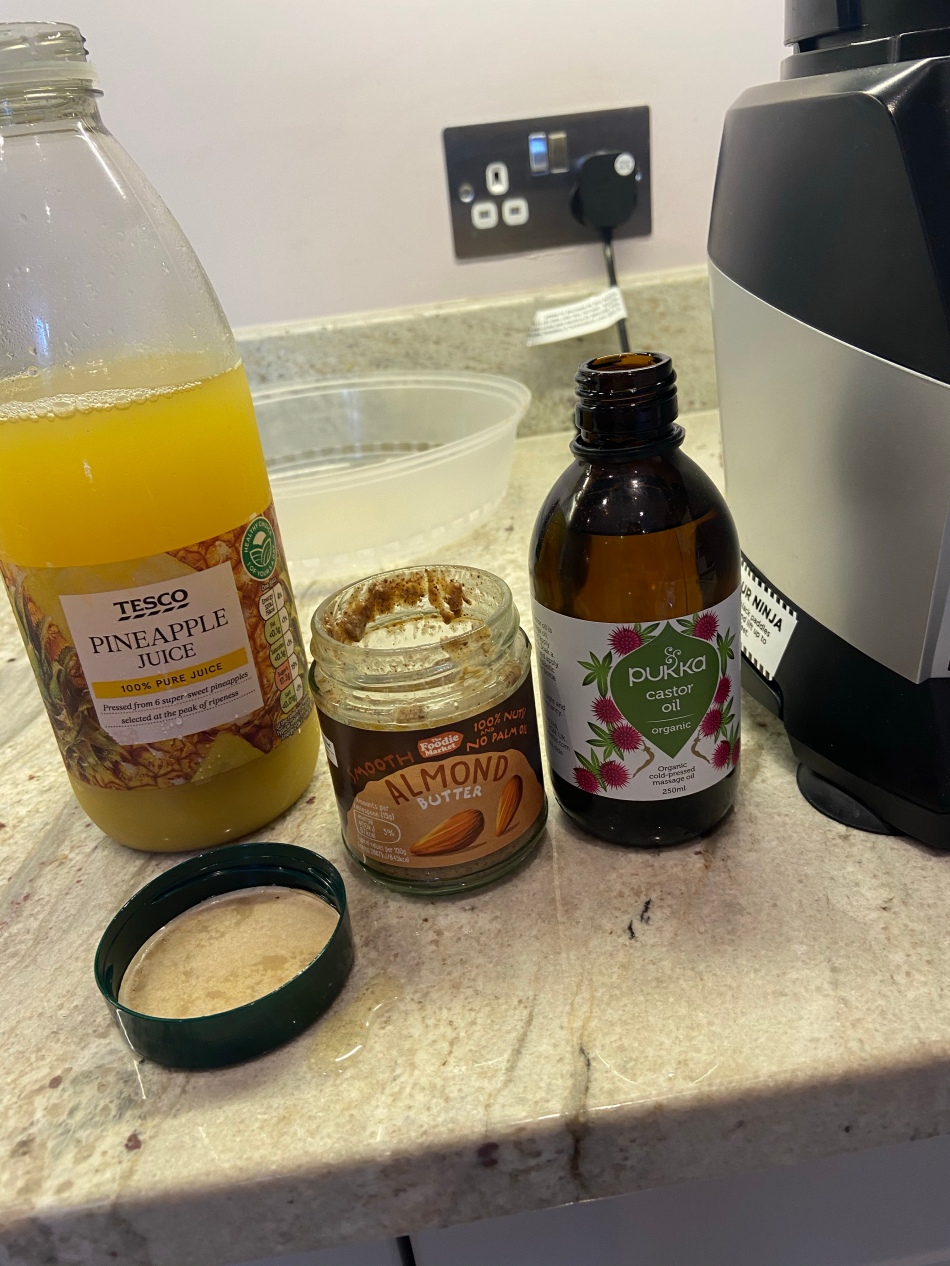 Well, still no baby. And that is not for the want of actual trying. Sal’s done every old wives tale going. She even took to drinking caster oil yesterday, which I’m sure was delightful. Especially as it was blended with the above (picture). Thankfully though she didn’t get the shits, which is supposedly common after ingestion.

We had a midwife appointment today at the hospital. I’m still not allowed into anything so again, I just sat outside in the car for 2 hours. The consultant midwife was MIA so the clinics were all running behind. When the consultant midwife finally turned up, Sal was consented for a Stretch and Sweep.

A Stretch and Sweep is where the midwife will a attempt to separate the amniotic sac from the cervix using a sweeping finger motion. This can trigger labor within 48 hours. There’s no guarantee of it actually doing anything and you can have multiple sweeps. Sal said that’s probably what being fisted feels like.

Whilst in there, pre fisting, Sal had a scan and the little bugger is back to back again. This baby is a fan of moving about. Thankfully it is still head down but since the last scan, bambino has moved from the occipito-anterior position (head down, facing the spine) to Back to back position, (head down facing away from the spine). The baby can be born this way but the labour generally takes longer and is more painful. The baby puts pressure of their mothers spine this way and it struggles to navigate its head through the cervix. They are ways and means of assisting baby to turn back into the preferred position. Sal is downstairs currently in the living room trying one via the medium of Youtube, (there’s a video for anything on Youtube). This one is some optimal position prenatal yoga video, she’s in there gruffing away to it. Every now and again I hear a Fuck my life. Must be going well.

Anyhoo, the Mother-in-law has flown in out of the blue. She talked about it for a while then just bought a one way ticket once Wales had come out of its circuit breaker lockdown. I think she was expected us to have had a baby by now, as did we. It’s lovely to have her though, regardless. We’ve no family here. Bar the dog, it would have been just Sal and myself blundering our way through with the newborn. Not that I’m slandering the dog, but beyond his walks, bowl and cuddles, he hasn’t shown much interest in anything else. He hasn’t even noticed Sal is pregnant. He probably just thinks she’s enjoying her peck a bit more. Something tells me he’s going to be very put out though. As it stands he’s the centre of attention. Potential problem? I doubt it, he’s a big softy. We’ll see what happens when the baby comes home. Time tells all.

0 comments on “I’d like my baby well done please Midwife.”