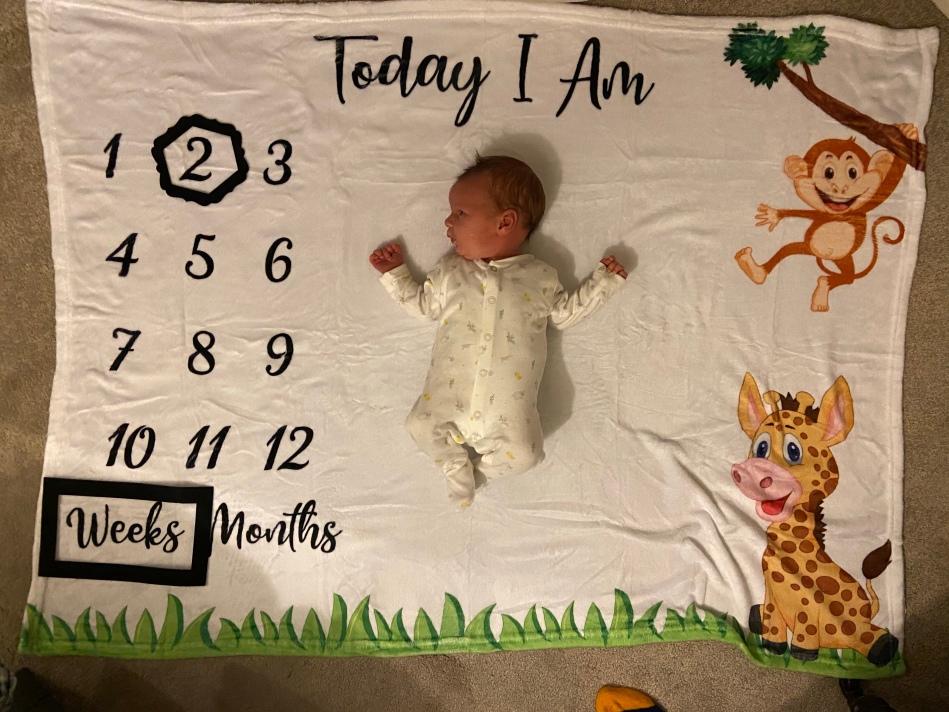 Baby T turned 2 weeks the other day. That’s him there in the photo.

I am not longer sure why people say they slept like a baby. I’m currently living my child’s sleep routine and I’m knackered. Baby T is still following his three hour cycle. He sleeps for three hours, wakes, screams for a boob / bottle and then guzzles it down merrily. Post boob or bottle he gets grouchy until he’s had a good burp then he settles. He then gets grouchy again because his nappy needs changing, which he hates. He hates being undressed, and dressed for that matter. Post change he’s decided he’s hungry again and grouches for another ounce or two. Out comes the breast or bottle, the only thing he’s not fussy about. This is followed by more grouching until there has been further burping. Finally his eyes start to close, he smiles and flashes his dimples. He then gurgles himself to sleep for about three hours. It’s adorable but like i said, knackering.

I’m probably still able to get a full 7 or 8 hours which is great but it’s very broken which is the hard part. You don’t feel properly rested and exist in a semi autopilot state most of the day. I like my sleep and I’m not one to function well without it. This in itself is strange given I used to work nights for 10 years as part of my job. I gave them up about 4 years ago and haven’t felt better since before I qualified and started doing them. There’s a great book called Why We Sleep by a chap called Mathew Walker,which I frequently recommend to anyone for any reason. Since i started taking sleep seriously, which is such an old bugger thing to say, I’ve found that I’m more productive, have more energy and recover faster from sport/gym. I honestly just find life better and easier with a good nights sleep. Again I daren’t complain to Sal as she’s still doing the lion share of the work, now that I’m back at work. She’s properly tired. Silence and caffeine are my friends.

I’ve just dropped Sal and Baby T off for a health visitor appointment. Driving down, Baby T’s arse had been rippling away. It had blown so hard that when we took off his nappy, it scored a F5 on the Fujita Tornado Damage Scale. It was everywhere. You’d be forgiven for thinking Neil Buchanan had just climbed in there and created some ‘Big Art’ for his new show Shart Attack. This of course means he needed changing, which he detests. So by way of apology he demanded some boob time.

A short while later, fresh off the boob and fresh in the arse, he is now dressed in some fluffy white bear looking outfit. He’s loving life. I couldn’t go in because Covid is a dick and still kicking about. Hurray for the first vaccine doses being rolled out to today. I’ll be getting mine soon and I can’t wait. In the mean time I’m sat here in a cafe, drinking with my friend caffeine and muttering my discontent at the lack of WiFi. It just means I’ll have to post this later today. (By later today I mean two days later)

I read that babies deliberately wake every few hours naturally as a preventative measure against cot death. I’d say hunger has a bigger role to play in this but it’s an interesting concept, in terms of a survival mechanism. I mean, were still pretty shit compared to the animal kingdom. You watch a David Attenborough nature documentary and you’ll see these lads being birthed on the plains of the Savanna. They pop out, hitting the deck from a decent height, get up and run about. By midday they’re being packed off to school and later that same day, they’re collecting a Degree in Get Up and Go form the university of Not Hangin’ Aboot. Compare that to human kids. Granted, we’re not being stalked by packs of insatiable cats but we are pretty damn useless as newborns. We just scream and seep which are terrible survival trait. You’re just advertising yourself as a fuss free lunch to what ever wee beastie is meandering about. And given that we walked out of the Rift Valley, they were some pretty big wee beasties doing the meandering.

That’s said, it’s 2020 and we’re still here. Drinking coffee and changing nappies. What do I know.

0 comments on “Hello Caffeine my old friend. I’ve come to talk to you again.”